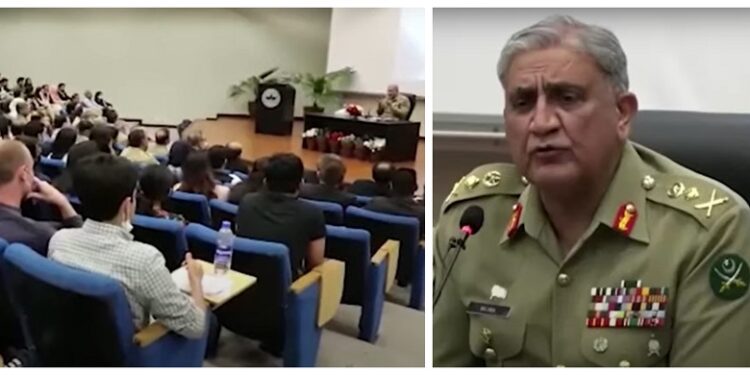 General Qamar Javed Bajwa engaged with around 80 students of LUMS as well as the faculty in a frank talk followed by a question and answer session that lasted over 6 hours yesterday. The Chief of the Army Staff answered tough questions of students, ensuring that every question was answered and most students left with nothing but praises for the COAS.

“Pakistan is blessed with dynamic and talented youth,” the COAS said, as quoted in an Inter-Services Public Relations (ISPR) press release. Students at LUMS who attended the COAS’s talk had reportedly been told not to publicize the details of his speech and discussion, according to members of the school’s faculty.

On social media, various users attributed this quote to General Bajwa: “If you think I call the shots in the country, then you don’t know who PM Imran Khan is.”

Maham Nasir, a teacher at LUMS wrote: “my student: “i don’t know what happened at LUMS yesterday but everyone who went into that session with the COAS was anti-establishment and came out as pro-establishment”.

Meanwhile, Nida Kirmani, another professor at LUMS who had consistently tweeted about the session before it began chose not to attend the session.