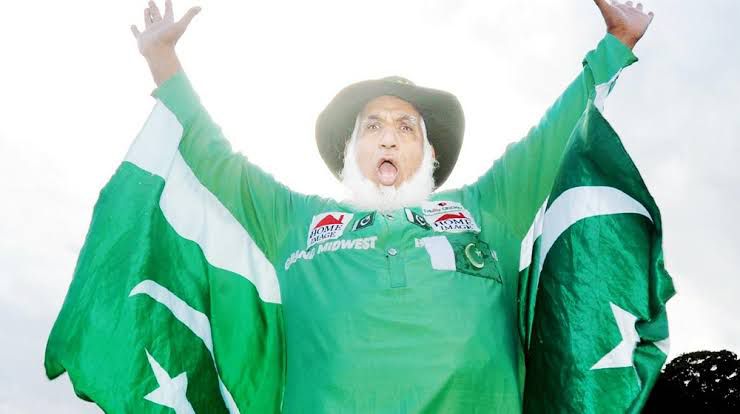 You don’t have to be a cricket fanatic to know this name. Pakistan cricket’s most-recognisable cheerleader, Chaudhry Abdul Jalil — for that is his real name — is known to fans and cricketing legends alike.

This man has watched over 500 cricket matches and built Pakistan’s first cement wicket in Sialkot with his own hands in 1968.

Chacha did not reach the heights of fame overnight. He had a fair share of struggles and disappointments during this journey, but his loyalty the men in green kept his hustle alive.

Born in Sialkot, he watched his first international match between Pakistan and the English cricket team 1969. But his passion for cricket began way before that. He used to play cricket with his family members in a ground in Sialkot.

In 1973, he left Pakistan to find work but when he settled in Abu Dhabi in 1979, he set up a Sialkot cricket club with his friends. Whatever time he could get away from his job in the forestry department in the UAE would be spent either playing or watching the game. 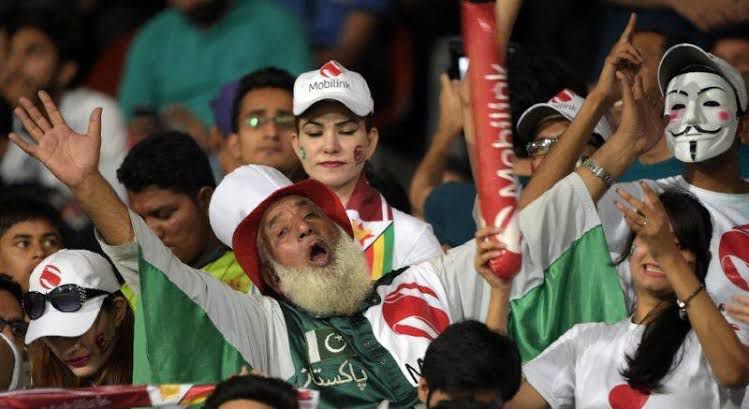 He started to be recognised by other Pakistan fans and a cult soon developed around his patriotic slogans. Then, in 1997, he was taken by the idea of having an outfit made for him in Pakistan’s colours.
Before long, crowds flocked to him when he appeared in cricket grounds and now he is officially sponsored by the Pakistan Cricket Board to follow the national team around the world.

Chacha first came into the limelight during the Austral-Asia Cup in 1994 in the UAE, mainly on the back of his unique attire — the traditional kurta that later sported big corporate logos — and loud cheering for Pakistan. But it was not until two years later that his face became instantly recognisable to the average Pakistani fan.

In 1996 he was approached by the Pakistan Cricket Board (PCB) to take over the mantle of the ‘official cheerleader’ for the national team. It was an offer too good to pass over.
Owing to this offer, he left his job and returned to Pakistan in 1998 but unfortunately for him, political developments the same year threw a spanner in the works; what was promised as a paid cheerleading job suddenly vanished.

The newly-appointed PCB secretary Waqar Ahmed did not think having an official cheerleader was a feasible idea and the deal was called off Chacha, who had just left behind a stable job with good pay in the UAE, was left high and dry.
Rubbing salt into the wound was the World Cup in England the next year; but the PCB refused to sponsor him “although it sponsored dozens of people”.

Chacha decided to take the bull by the horns. In 1999 he sold of his house, his only asset to bear the expenses for his mission. He went to the British embassy to fill the visa application form. He had no bank balance, property or income tax statement. All he had were pictures of himself wearing his famous attire and waving the Pakistani flag at famous cricket stadiums in different parts of the world. 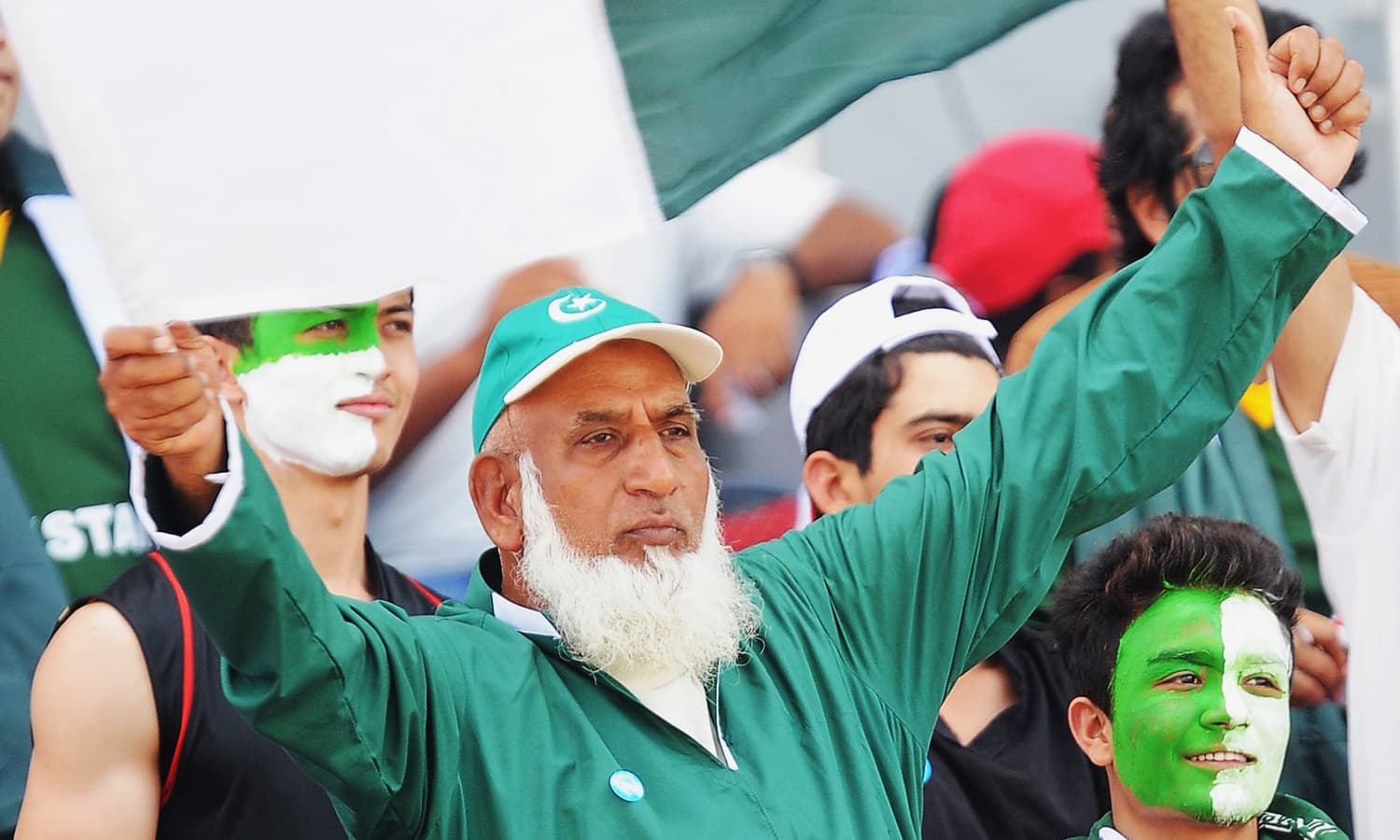 That did the trick: the photos impressed a senior official in the embassy who decided to grant him a visa without an interview or checking of any documents. He got the visa for England in one hour.
A friend, Mir Dawood, also helped him by sponsoring his flight tickets and meeting some of the expenses.
On June 21, 1999, a day after his hopes were dashed at Lord’s, he says a UK newspaper published a photo of him. “They said I was the number-one World Cup find,” he reminisces.

There was no turning back for Chacha after that.

Since 2000, the Pakistan Cricket Board (PCB), so impressed with his efforts, have paid him a monthly wage. Other sponsors like ARY family, Aftab money transfer and other friends and family have helped Chacha through his journey and he has never missed the chance ever since to lead his country’s crowds.

Chacha has been to 300+ international matches and was there to witness Javed Miandad’s famous sixer- after which he distributed sweets worth Rs. 100,000.

Witnessing the innings of Javed Miandad to today’s centuries by Virat Kohli, Chacha has seen generations of cricketers going in and out with his slogans hailing for the team louder throughout. 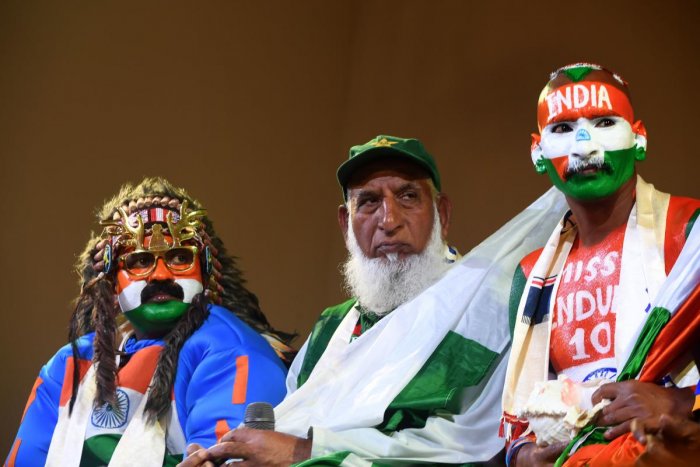 Today, he has no regrets over leaving a cushy job in the Gulf.

“I am very happy about living in Pakistan,” he says. “People ask me how I stay happy after losing so much. I tell them that anyone who has a clean heart stays happy in all situations.”

He flaunts shields and certificates awarded to him in recognition of his unstinted support for national team, he holds the Pakistani flag dear to his heart and wears it like a crown.

Do you think he deserves the Pride of Performance award?