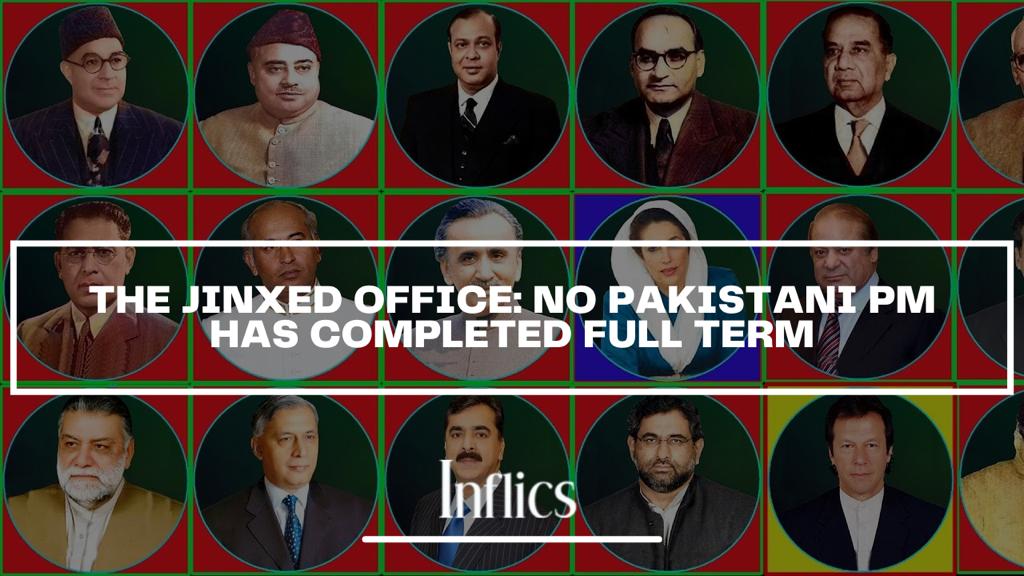 Since 1947, Pakistan has had nineteen prime ministers, but post of the Prime Minister in Pakistan can be said to be doomed as it carries a bizarre pattern. Imran Khan, Pakistan’s 22nd PM, despite his popularity could not undo the jinx.

The premiership of I. I. Chundrigar was the shortest in Pakistan’s history, serving only 55 days of his term. At approximately five years and four months in total, Sharif is the longest-serving prime minister.

The ill-fate of the country began just four years after its advent with the assassination of the first-ever elected PM of the country.

1. Liaquat Ali Khan:
• PM for 4 years 62 days
• He was assassinated in 1951 by an Afghan National. But the police officers eliminated a crucial piece of evidence by murdering the assassin right there.
• The mystery remains unsolved. Was it a foreign conspiracy?

After Liaquat Ali Khan’s assassination, power hustle between The Muslim League and other leaders led to the change of five prime ministers in just the span of 6 years from 1951-to 57.

2. Sir Khawaja Nazimuddin:
• Tenure: 1 year 182 days
• He left the office when Governor-General Malik Ghulam Muhammad dissolved his government in 1953.
3. Mohammad Ali Bogra:
• Tenure: 2 years 117 days
• His administration was dismissed in 1955 by the Governor-General after the legislative elections in 1954.
4. Chaudhry Mohammad Ali:
• Tenure: 1 year 31 days
• He was removed by his own party following the successful vote of no-confidence movement.
5. Huseyn Shaheed Suhrawardy:
• Tenure: 1 year 35 days
• Suhrwardy resigned due to the loss of control over his party and support from the coalition partners in his administration
6. Ibrahim Ismail Chundrigar:
• Tenure: 60 days
• Second shortest tenured Prime Minister, Chundrigar established his administration but removed in mere 55 days into his term amid a vote of no-confidence movement led by majority votes of the Republican Party and Awami League.

Other than party politics, Pakistan saw two undemocratic military rules from 1958 to 1973 and then in 1977.

7. Sir Feroze Khan Noon:
• Tenure: 295 days
• Sir Feroze Khan’s administration collapsed after his party’s own President Iskander Mirza enforced martial law in 1958
8. Nurul Amin:
• Tenure: 13 days
• Shortest tenured Prime Minister. Amin’s term as prime minister was cut short as General Yahya Khan resigned, leaving the Deputy Prime Minister (and Foreign Minister) Zulfikar Ali Bhutto to be sworn in as the new president.
9. Zulfikar Ali Bhutto:
• Tenure: 3 years 325 days
• He was deposed in the martial law in 1977 by his appointed army chief, General Zia, in July 1977.
10. Muhammad Khan Junejo:
• Tenure: 3 years 66 days
• He was dismissed by the president after Eighth Amendment to the Constitution.
11. Benazir Bhutto:
• Tenure: 1 year 247 days
• Her administration was accused of corruption and nepotism and dismissed by President Ghulam Ishaq Khan in 1990.
12. Nawaz Sharif:
• Tenure: 2 years 254 days
• President Ghulam Ishaq Khan attempted to dismiss him under article 58-2b, in April 1993, but he successfully challenged the decision in the Supreme Court. Sharif resigned from the post negotiating a settlement that resulted in the removal of President as well, in July 1993.
13. Benazir Bhutto:
• Tenure: 3 years, 17 days
• Bhutto’s government was dismissed by President Farooq Leghari in November 1996.
14. Nawaz Sharif:
• Tenure: 2 years, 237 days
• His government was deposed by General Pervez Musharraf in October 1999, and Martial law was imposed in the entire country.

From 2002 to 2022, Pakistan had at least 8 PMs coming and going into office with Yousaf Raza Gillani serving the longest for 4 years 86 days.

15. Mir Zafarullah Khan Jamali:
• Tenure: 1 year, 216 days
• He continued the foreign and economic policies of Pervez Musharraf but could not complete his term and resigned from the post in June 2004.
16. Chaudhy Shujaat Hussain:
• Tenure: 57 days
• Parliament elected Chaudhry Shujaat Hussain as the Prime Minister and to serve a 50-day period
17. Shaukar Aziz:
• Tenure: 3 years 79 days
• He left the office at the end of the parliamentary term, in November 2007, and became the first Prime Minister of Pakistan who left the seat after completion of parliamentary term.
18. Yousaf Raza Gillani:
• Tenure: 4 years 86 days
• He was disqualified from his seat in the parliament in April 2012 by the Supreme Court for contempt of court.
19. Raja Pervaiz Ashraf:
• Tenure: 275 days
• Ashraf assumed the post of Prime Minister in June 2012, after Yousaf Raza Gillani was disqualified over contempt of court charges.
20. Nawaz Sharif:
• Tenure: 4 years 53 days
• He was disqualified on 28 July 2017 by the Supreme Court of Pakistan as a result of the Panama Papers case.
21. Shahid Khaqan Abbasi:
• Tenure: 303 days
• His term expired on 31 May 2018 alongside the dissolution of the National Assembly to facilitate a caretaker government in place until the 25 July general election
22. Imran Khan:
• Incumbent PM of Pakistan since 18 August 2018

Will Imran Khan be able to complete his term?