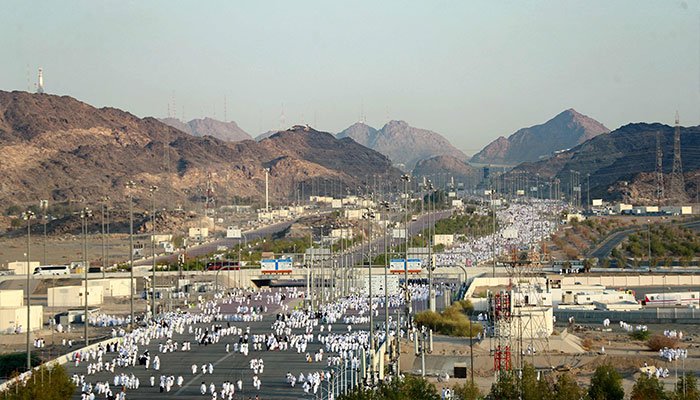 Sheikh Muhammad Al-Issa, member of the Council of Senior Scholars and secretary-general of the Muslim World League (MWL), delivered the Hajj sermon at Masjid-e-Nimra. Delivering the wide-ranging sermon from Masjid-e-Nimra, he said that Islam is a religion of peace and there is only one Allah and Hazrat Muhammad Mustafa (PBUH) is the last prophet.

Hundreds of thousands of Muslim pilgrims from around the world converged in Maidan-e-Arafat on Friday to perform the Rukn-e-Azam of Hajj “Waqoof-e-Arafat” which marks climax of the Hajj.

The worshippers, capped at one million including 850,000 from abroad, spent the night at camps in the valley of Mina.

The pilgrims after listening to the Hajj Sermon at Masjid-e-Nimrah will pray and recite the holy Quran for several hours at the mountain and sleep nearby.

After Azaan-e-Maghrib, the pilgrims will leave for Muzdalifah where they will offer Maghrib and Isha prayers together and spend the night under open sky. From Muzdalifah, pilgrims will also collect pebbles to throw at Satin the next morning.