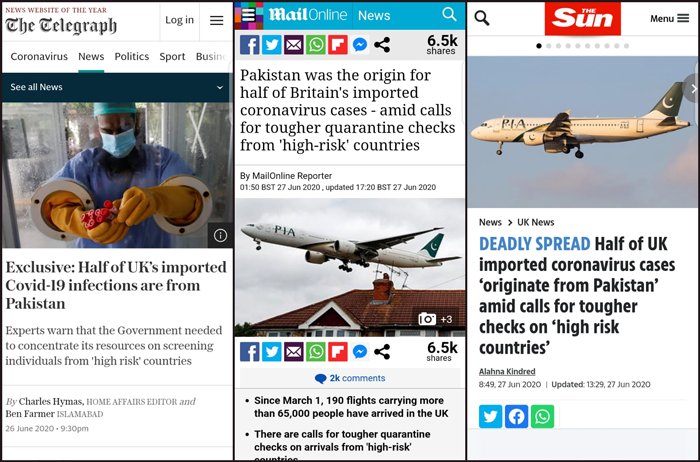 Five months after sensationally reporting that Pakistan was the origin of and responsible for half of Britain’s imported coronavirus cases, two influential UK newspapers have accepted that they published misleading and false headlines. A story was first published on July 26 by The Telegraph newspaper with the headlines: “Exclusive: Half of Britain’s imported conronavrius cases originate from Pakistan”.

The same story was republished by Daily Mail, The Sun, Breitbart and several other papers.

The Centre for Media Monitoring (CfMM), associated with the Muslim Council of Britain (MCB), complained to the Independent Press Standards Organisation (IPSO), and after a detailed inquiry a verdict has now been given.

Mail Online has now clearly mentioned on its website in a subhead and footnote that the figure of 30 cases was only from the period of July 4 to July 27.

Mail Online said: “The headline to this article has been amended since publication to make clear that the number of imported cases of COVID-19 from Pakistan into Britain related to the month of June.”

Daily Telegraph tweeted: “Our tweets 26/6 “Pakistan origin of half of Britain’s imported virus cases was misleading as it suggested that half of all the UK imported cases originated in Pakistan, in fact, the figures only related to the period 4-26”.