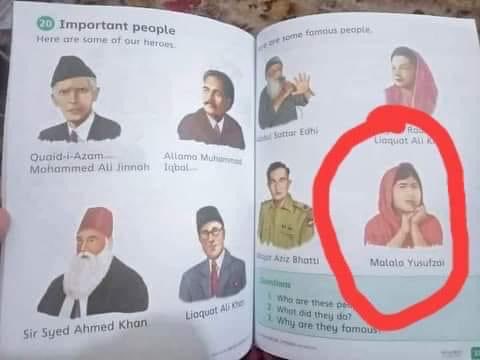 Punjab Curriculum and Textbook Board (PCTB) confiscated on Monday an Oxford University Press (OUP) grade 7 social studies book that printed a picture of Malala Yousufzai. Malala’s picture was included alongside that of war hero Major Aziz Bhatti Shaheed of 1965. It was placed among the list of important personalities of Pakistan, which included Quaid-i-Azam Muhammad Ali Jinnah and Allama Iqbal.

The book has also been purchased by a number of educational institutions. Malala’s picture, alongside Aziz Bhatti’s, was published when the report was filed, so they confiscated copies of the book. Officials confiscated every book from the OUP office in Mini Market, Gulberg on Monday. The press was also given a letter stating that the book had not been granted a No-Objection Certificate (NOC).