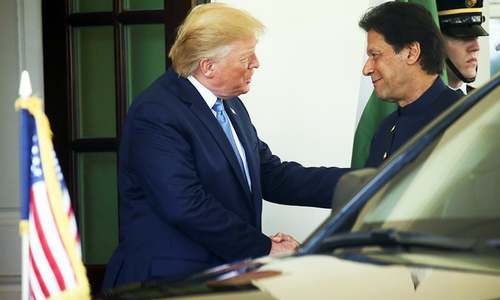 Prime Minister Imran Khan has arrived at the White House for his first one-on-one meeting with US President Donald Trump. PM Imran, accompanied by Foreign Minister Shah Mahmood Qureshi, was warmly welcomed by President Trump outside the White House. Both shook hands, waved at the eager PTI supporters and headed inside White House to commence their first meeting.

In televised remarks from inside the Oval Office, President Trump noted that the US is working with Pakistan to leave Afghanistan, and does not want the US to be policeman in the region.

He also offered to intercede to improve strained relations between Pakistan and India, and further said that aid to Islamabad could be restored depending on the kind of understanding reached between the two leaders.