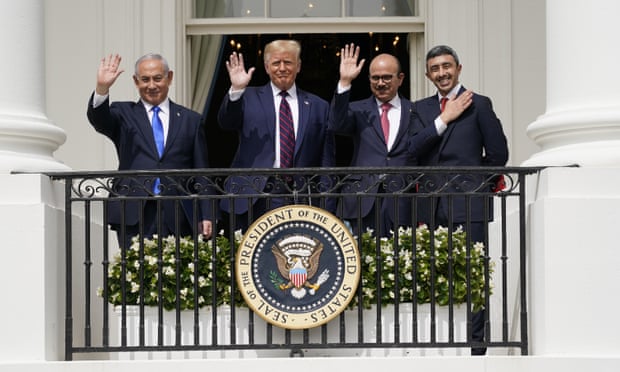 Diplomatic breakthroughs between Israel and Gulf monarchies have left the Palestinians feeling betrayed and anxious about the future. Palestinians believe peace deals will encourage Israel to continue occupation with confidence an full force. US President Donald Trump has hinted that several more Arab states would soon announce their intention to sign similar deals, suggesting a more substantive shift.

Israel’s efforts to pursue ties with Arab world bore fruit last week when Bahrain and the United Arab Emirates signed accords with Israel at a White House ceremony to establish an open business and diplomatic relationship.

Under a 2002 Arab Peace Initiative, Arab nations declared Israel would only receive “normal” ties in return for a statehood deal with the Palestinians and an end to the occupation. That longstanding policy had now been undercut, warned the Palestinian ambassador to the UK.

Palestinian officials warn regional pressure is more critical now than it has been for years. Threats of further regional isolation, they say, helped dissuade Israel from going ahead this summer with its much-publicised plans to annex parts of the occupied West Bank. “The Arabs had a major role,” said one Palestinian official on condition of anonymity.

Under Israel’s deal with the UAE, it agreed to “suspend” annexation, but critics of the deal say that clause was only added as lip service to the Palestinian issue. Meanwhile, politicians in Israel argue the annexation plan is still a priority.