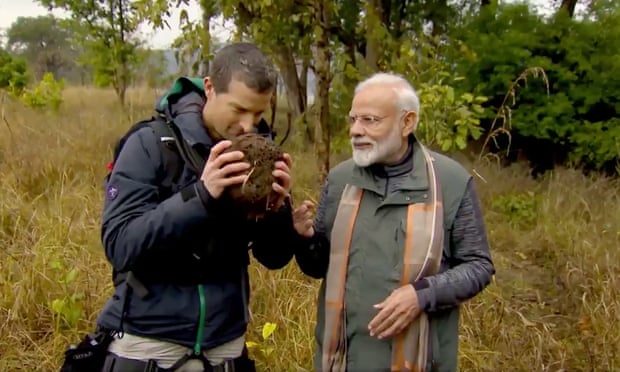 Indian prime minister, Narendra Modi, will appear with Bear Grylls in a wilderness survival programme, in which the 68-year-old leader projects himself as a man of action and champion of environment. A trailer of Man vs Wild, will air on 12 August. The two men are seen cutting through forests, sniffing animal dung and floating down a river on a makeshift raft.

The programme is the latest of Modi’s choreographed media appearances where the strongman leader casts himself as the a symbol of masculinity, strength and robust health – a pitch that appeals to his party’s nationalist voter base. The programme previously caused controversy in India after the Indian Express reported that Modi was likely to have been filming with Bear Grylls on the day of a terror attack in the disputed region of Kashmir.