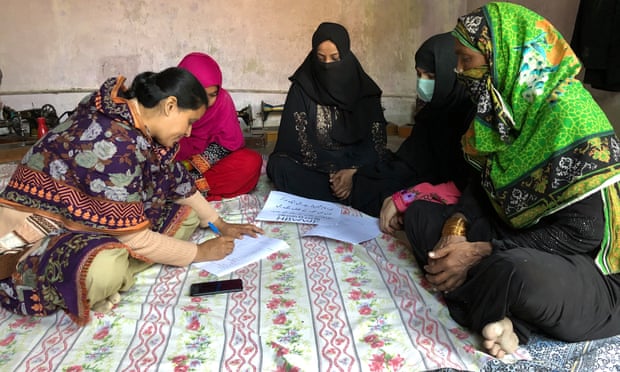 Sindh has become the first province in Pakistan, to enact a law to award employment rights to an estimated informal workforce of 3 million people. In 2018 Sindh passed the Home-Based Workers Act, making Pakistan the only country in south Asia where home workers were recognised as official labourers. It is believed that 12 million people across Pakistan are home-based workers, of which 80% are women.

Their contribution to the economy is sizeable – the informal sector accounts for 71% of employment in Pakistan outside agriculture, according to the Labour Force Survey for 2017–18. In rural areas 75% of people are classed as informal workers.

It’s been a long journey for these women to get to this point. The Home-Based Women Workers Federation (HBWWF), has been fighting for its 3,500 members to be able to claim social security benefits and receive a living wage since 2009.

Shamim Bano has been an invisible worker for 40 years. Working 12-hour days from home as a “cropper” in the port city of Karachi, she cuts the loose threads off clothing and makes samosas to sell at schools.

Bano is paid about 25 Pakistani rupees (£0.10) a day. But now Bano has become visible – as the first person to register under new legislation that will finally recognise her work.